Here is an update of the original chart that I made a few years ago showing every time the Grateful Dead’s original songs were played live. 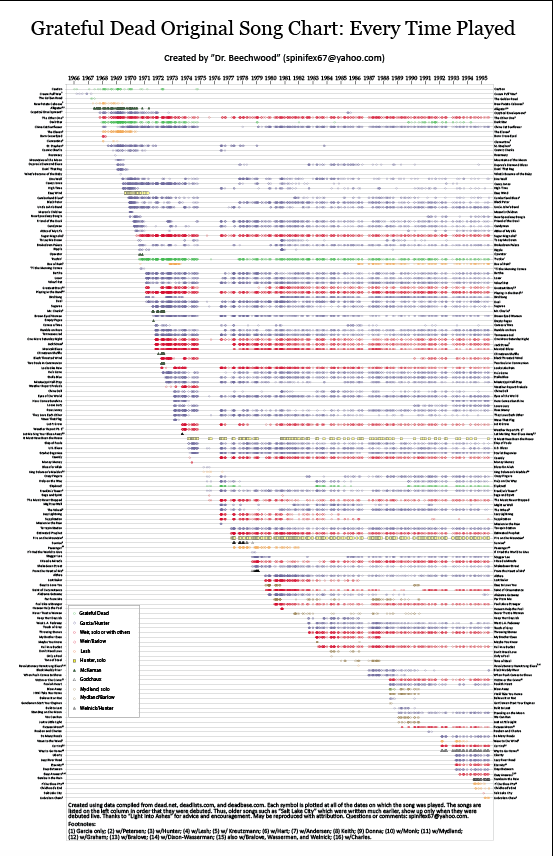 This is a low-res thumbnail image - the full-sized version can be downloaded at:
https://drive.google.com/file/d/124cHzJsW3o1IEB8N-kXBNjEafNeXOVpq/view

There are 151 original songs. The chart begins with the songs on the Dead’s first albums, so their earliest songs from 1965-66 that were dropped earlier are not included. The chart now includes the previously missing Pigpen song Empty Pages, played twice in 1971, as well as all of the Mydland and Welnick originals. A few Dead originals, such as Pride of Cucamonga, were never played live and are absent. (Two Hornsby songs played by the Dead, Valley Road and Stander on the Mountain, are here considered covers and not included.)
Weir’s songs with and without Barlow are given different symbols, as are Mydland’s songs with and without Barlow. I have not given a separate symbol to the two early Garcia songs for which he wrote both the words and music (Cream Puff War, Cryptical Envelopment). But the songs primarily credited to Robert Hunter are marked separately, as he wrote both the words and music for Easy Wind and It Must Have Been the Roses, and co-wrote Fire on the Mountain with Hart.
Additional songwriters are listed in the footnotes; for instance, Hart and Kreutzmann are co-credited in several songs. The songwriters not in the Grateful Dead include Bobby Petersen, Eric Andersen, Peter Monk, Gerrit Graham, Bob Bralove, Willie Dixon, Rob Wasserman, and Andrew Charles.
Most song credits are from dead.net, but note that some credits are inconsistent between the original album and other sources (such as live album releases).

The dates are taken from deadbase.com (before the site went down) and deadlists.com. The pre-’69 shows are more sparsely documented, and there are probably some versions of songs missing. For example, deadlists.com has separate entries that sometimes list “St. Stephen” and other times “Saint Stephen.” I tried to catch most of these.

The twenty least-frequently played original songs from post-1967 (based on existing knowledge) are:

A longer essay on the Dead's original songs can be found at the older post:
http://deadessays.blogspot.com/2011/07/grateful-dead-song-graph.html

The chart was created using Excel and importing the graph into Illustrator to make the labels and other graphic design elements. A better version could be created using a real database program. If the graph were created using Google Charts, then hovering over each point would give you the actual date of that song’s performance. I would be happy to share the data with someone if they want to create a better version of this, provided credit is given to my work compiling the data and this original graph.
Posted by Light Into Ashes at 11:18 PM