The Brief Tale of Mountains of the Moon

Aoxomoxoa marked the first big songwriting boom of Hunter & Garcia. Hunter had started writing for the Dead in late '67 (Dark Star, Alligator, China Cat), but Anthem of the Sun turned out to be very much a 'group' album, with contributions from all over the place. But through 1968, Hunter and Garcia kept writing songs together, enough to fill their next (short) album. Aoxomoxoa was another change of direction for the Dead - not so thoroughly psychedelic or full of jamming this time, here poppy tunes and weirdness rubbed side by side in songs that offered a variety of styles.

For the most part though, they weren't songs that would last long in the Dead's set - though everything was played at least once, few of the tunes would survive '69. Cosmic Charlie would linger into 1970, St Stephen lasted to 1971, and China Cat made it all the way to 1974....each of them would be picked up again later on as the band found reasons to try them again, but Garcia was generally not too happy with his early songs. Hunter was practicing bizarre poetic lyrics at the time, obscure and trippy, which Garcia would claim were "too far-out, really, for most people"; Garcia in this period was having fun composing tricky, complicated music, but later on he complained that songs like St Stephen and Cosmic Charlie were too difficult to play. (China Cat, the big success story among this group of songs, he called "marginal".)

Garcia said of Mountains of the Moon that it was "one of my favorite ones. I thought it came off like a little gem" - and years later, "That song turned out nicely. I had an acoustic setting in mind from the get-go and it turned out pretty much how I envisioned it. I don't know what made me think I could do a song like that.... I like the tune a lot." Yet it wasn't played very often - we only have thirteen performances. (The Dead never revived it either, though Hunter hoped they would, and even Constanten did a cover.)

It's a simple enough tune, and with its acoustic arrangement is a precursor to the more folky tunes the Dead started doing in mid-'69 - which is exactly when the Dead dropped it. (On 6/7 it rubs shoulders with the first Dire Wolf, and on 7/12 it follows country covers of Green Grass of Home and Slewfoot.) Possibly Garcia was more excited by the new material. The lyrics don't make much sense (Hunter says he was rushed) -
http://arts.ucsc.edu/GDead/aGDL/moon.html

Mountains seems like Hunter was trying to recapture the ancient mystery of old folk songs, and with the simple guitar picking and Constanten's harpsichord-like accompaniment it sounds like it could have come out of some English renaissance court. I like Lesh's bass line, which even in live shows imitates an upright acoustic bass sound and gives the song more depth; he didn't often have such a quiet setting to work in. Mountains was always a welcome appearance when it was played - a brief mystical acoustic respite from the "sweat and steam and uproar and tumult" that made up an early-'69 Dead show.

There are a couple outtakes (or alternate mixes) of Mountains from the Aoxomoxoa sessions - they sound pretty much identical to the album version.
http://www.archive.org/details/gd69-xx-xx.sbd.dodd.16760.sbeok.shnf

There is also a picture (on page 15 of the Taping Compendium) of Garcia, Lesh, and Constanten recording Mountains in the studio!

The first live version we have is from 12/20/68 (a very hissy tape): the Dead abandon a snappy Eleven mid-jam for some reason and Garcia immediately gets out his acoustic to treat the bewildered audience to a new song. (Somewhat like the one-time Rosemary of 12/7/68.) Mountains is more jaunty than it would be next year, and Garcia isn't fully practiced with it yet, stumbling at one point with the guitar, but he gives a nice little acoustic solo at the end.
http://www.archive.org/details/gd1968-12-20.sbd.miller.89663.sbeok.flac16

Mountains pops up again a month later, at the Playboy After Dark TV session on 1/18/69 (though not broadcast until 7/10, after Aoxomoxoa had been released). It's interesting that of all the new songs, this is the one Garcia wants to play first - in fact, he's beaming, probably quite high. The song is smoother now, and Constanten's playing dominates this version. (Weir is playing as well, but inaudible I think; he always stayed on electric and turned down very low for this song, so his fills are often hard to hear. Depending on the mix, Constanten is frequently inaudible as well.) The TV editors obviously found this tune the most accessible, as they left it complete but snipped up the St Stephen and following jam.
http://www.youtube.com/watch?v=NVqArOogY-c

Although other new songs (Dupree's, Doin' that Rag, Cosmic Charlie) were debuted early on in the January '69 shows, we don't have another live Mountains until 2/11/69, but already it's found a definite place in the set. It always follows Dupree's Diamond Blues - probably because they were the two acoustic songs, so it made sense to play them together. And always until April, it segues into Dark Star. This became one of the ideal Dead song pairings, the reflective mystery of Mountains hushing the atmosphere and opening up to the interstellar quest of Dark Star - in the Mountains outro, after his wiry acoustic solo Garcia would switch back to electric guitar while the rest of the band kept playing, and after a few electric licks they would start Dark Star. The transition was never very long though - Lesh or Garcia would always be in a hurry to start Dark Star, so the Mountains jam is rarely more than a couple minutes. But it seems to me more than a coincidence that some of the best Stars of the year come out of Mountains.

On 2/11/69 there's a very short segue, they go into Dark Star as soon as Garcia's switched guitars. This show was a strange selection for release; since the Dead had to finish their sets in an hour, they seem to abbreviate the Dark Star, which is a very short, tame version for the time as they rush through the themes. It would be nice to hear the rest of 2/12 to see how it compares.
Again on 2/15/69 there isn't much of a jam out of Mountains, they go straight into Dark Star which is pretty low-key. Garcia stops playing for several minutes in the middle (perhaps having amp trouble), so it's interesting to hear Lesh & Weir jamming the Dark Star by themselves.
http://www.archive.org/details/gd69-02-15.sbd.winters.16664.sbeok.shnf

2/22/69 is a great show, probably the best of February (after 2/28). The Mountains transition is better this time, still short but it has that 'questing' feel familiar from Live Dead; the Dark Star is dreamy and mesmerizing, with a rare segue into Cryptical, and the rest of the show is just as good.
http://www.archive.org/details/gd69-02-22.sbd.owen.7860.sbeok.shnf

2/27/69 of course is famous for the elegant Live-Dead Dark Star. They could have opened the record with the Star riff, but decided to start a little sooner, fading in as the band wanders gently out of Mountains and Lesh opens up the door to Dark Star. Many of the best moments of their shows came 'in-between' songs as they kept playing with no particular direction, just freely improvising to see what turned up; it's fitting that their first live album would start with one of those moments. The next Mountains, on 3/1/69 would be quite different as there is no segue - they stop for a break while Garcia switches guitars.

They apparently didn't play any more Mountains during March, but it shows up again on 4/5/69, with a very nice acoustic solo and a short electric segue into a super-magical Dark Star. By now they're starting to rely less on repeated themes in the Dark Star, there's more 'free' jamming, and they're getting closer to the 'space' section that they'd later use after the verse.
http://www.archive.org/details/gd69-04-05.sbd.miller.18701.sbesok.shnf

4/22/69 has the best transition into Dark Star; Garcia's electric solo continues his acoustic thought and the band jams for a minute, already in a Dark Star space. The Star is dense and magnificent, the most expansive of that spring.
http://www.archive.org/details/gd69-04-22.sbd.clugston.68.sbeok.shnf

4/26/69 is an unusual show, starting with four Aoxomoxoa songs in a row. There's a great transition jam out of Mountains, the longest yet. Garcia decides to take it into a raucous China Cat; Dark Star would be deferred until the great version the next night. (Dick's Picks 26)

The Mountains on 6/7/69 has a nice acoustic solo, but no electric jam at all, going straight into a strong, slowly building Dark Star.
http://www.archive.org/details/gd69-06-07.sbd.kaplan.9074.sbeok.shnf

They probably played Mountains some more that summer, but the last performance we have is from 7/12/69, in an extremely poor-sounding tape. The audience claps when it starts - Aoxomoxoa has come out so they've heard it on the new Dead album! It's an unusual version in that, after a long acoustic jam, Garcia reprises the song, stretching it to nine minutes. This would probably be the most trancelike Mountains if it were in better quality - showing how it might have developed if they'd opened it up a bit more.
http://www.archive.org/details/gd69-07-12.sbd-aud.hanno.4645.sbeok.shnf 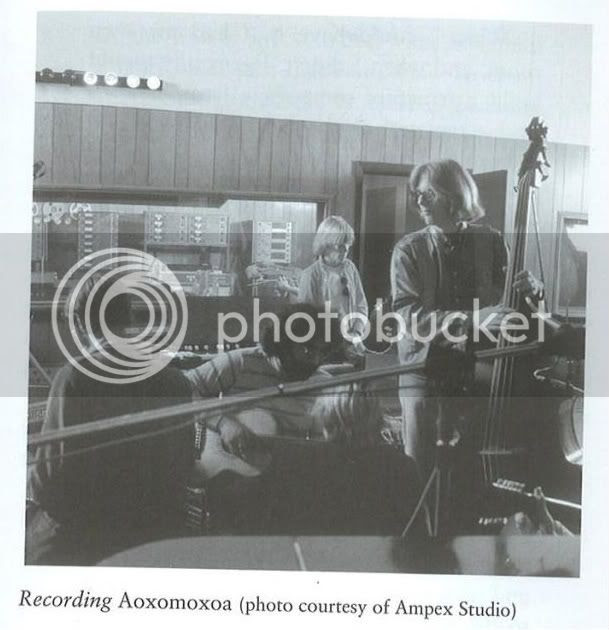 Posted by Light Into Ashes at 2:47 AM

I've decided not to use tags, since I think the search function is more convenient. (It's at the bottom of this column.)

http://thejerrysite.com/
Looking for info on Garcia's non-Dead shows? This is where to go.