I was spurred to write this by a fellow Dead researcher:
http://jgmf.blogspot.com/2010/12/garcia-on-jefferson-airplane.html
It seemed like it would be useful to have a thorough review of Garcia’s involvement in Surrealistic Pillow.

Garcia was listed as the “Musical and Spiritual Adviser” on the back cover when it was released in February ’67. Though perhaps meant to be tongue-in-cheek, it’s actually quite a serious indication of Garcia’s high standing (at least among the Jefferson Airplane). Hidden behind that vague credit, Garcia did quite a bit of work on the Airplane’s album, a couple months before the Dead even entered the studio – in fact, he spent more time on Surrealistic Pillow than he did recording the Dead’s first album!
This is even more surprising since the Airplane were comparative veterans of the studio, compared to Garcia. They had almost as much playing experience as the Dead – they’d formed just a few months later than the Warlocks, gotten a record contract with RCA much earlier, and were already the most successful band in San Francisco, thanks in part to a first album (Takes Off) which had captured lots of attention.
The Dead, meanwhile, had only just signed up with Warner Brothers in September ’66 and wouldn’t record for a few more months. Garcia’s only known studio experience was a few sessions & demos with Autumn Records back in ’65, and a disappointing attempt at recording a single in June ‘66. (His early studio work is actually mostly unknown, really. When asked later on about his pre-Dead recordings, Garcia vaguely replied, “I did some various sessions around San Francisco. Demos and stuff like that.” I haven’t seen any more definite information!)
On the other hand, the Airplane looked up to Garcia as a guitar player and musician. They had not been too happy with their first album (just as the Dead would later feel!), and felt they needed extra help making things run smoothly in the studio. They had also been going through changes – new drummer Spencer Dryden had joined in July ’66, and singer Grace Slick had just joined them in mid-October, only a couple weeks before they started the album sessions. So it’s likely they were still pulling new material together when it came time to record.

Garcia was asked about Surrealistic Pillow in a mid-’67 interview – the interviewer enthused about How Do You Feel: “Yeah, I played flattop on that. I didn’t play flattop in My Best Friend. Skip Spence did – he wrote the song. Let’s see, on Today I played the high guitar line, and I played on Plastic Fantastic, and I played on Comin’ Back To Me… I’m fond of the songs that Grace is in: I like Rabbit a lot, I like Someone to Love – the original on the album is more or less my arrangement, I kind of rewrote it. I’ve always liked the song she used to do with the Great Society, but it didn’t have - the chord changes weren’t very interesting.”
This is the Great Society’s version of Somebody to Love, pre-Garcia:
Studio - http://www.youtube.com/watch?v=NzyDLwUgFdc
Live - http://www.youtube.com/watch?v=4SB11giesKc

(In the same interview, he was asked about the ‘San Francisco Sound’: “I’m not sure what they mean by that. There’s a similarity in the sound…but there’s not really that much similarity in the music… Each of the bands sounds as different from each other as they do from everybody else. The San Francisco music scene is healthier and there’s more stuff going on than there is anyplace else… We all steal freely from each other, we all play together, we’re all friends, we spend a lot of time with each other, we all listen to each other, we’ve all gotten good together, we’ve all improved over the past year or so...playing gigs, getting together and jamming.”)

Garcia later said, “The Airplane thought it would be helpful to have somebody there who could communicate to their producer… And since they all knew me and I understood their music and understood pretty much what they were doing at the time, it would be far-out. I went down there and hung out and was a sort of go-between between them and their producer. I helped out with some arrangements and stuff – I just hung out.”

The Airplane felt Garcia did more than just hang out!
Paul Kantner said, “We had an RCA producer, but Garcia did the art side of it.”
And Jorma Kaukonen said, “Jerry could be credited with really being the producer…in that he was one of us and he knew what to do with the band… He really was the producer who arranged those songs.”
The RCA producer was Rick Jarrard - the Airplane hadn’t liked the producer on their first album, but again they used engineer Dave Hassinger (whom the Dead would work with later).

As Kantner told the story: “Our first album had been made rather restrictive by RCA and we were sort of unhappy with the results, and we needed to get more communication between us and the studio, and in some idiotic fancy of mine, we figured Jerry Garcia would be the person to communicate some of the things we were trying to accomplish in the studio. So [the engineer] would know that Jack's bass should make the board smoke. Smoke comes out of the board, put another fuse in; don't try to damp it down…
"We would be rehearsing something out in the studio, [Garcia] would say, 'I have a nice little part that would work in there; maybe you should play this.' And he would pick up his guitar and go boom, 'Why don't you play that?' and he would play it so good that we said, 'Why don't you play it? It sounds really good and we can't play it better than that. Come on, help us out here.'
"But mostly he was there to serve as sort of a buffer zone between us and the other side of the window. A lot of what we were trying to do, both sound-wise and lyric-wise was eased quite a bit by his very gentlemanly manner. He was not harsh, not abrasive…”

Nonetheless, Garcia is listed as playing guitar on RCA’s session paperwork.
He played the high lead part on Today - he also played guitar on Plastic Fantastic Lover, How Do You Feel, and Comin’ Back To Me - he also played on JPP McStep B Blues and In the Morning, which weren’t included on the album – and he also rearranged Somebody to Love. (All this aside from musical suggestions which went undocumented.) By the band’s admission, this was clearly more than casual session work – Garcia was virtually a band-member! It’s likely that he wasn’t given any music credit on the album since he was now a Warner Brothers artist, while the Airplane were on RCA; so the band may have preferred him to work officially ‘undercover’.
(As an aside, though it’s been thought that Garcia played guitar on My Best Friend, we have his word it was Skip Spence – which is curious, because Skip by then was long out of the band, and already playing in Moby Grape.)

The recording sessions went through November 1966 – though the Dead had shows on the weekends, apparently Garcia would fly down to Los Angeles for the Airplane’s weekday recording sessions. It’s clear he attended every session he could, from start to finish, and he must have stayed with the Airplane extensively between sessions while they were in L.A.

Here’s the rundown:
Oct 31 (Mon) – they started with She Has Funny Cars and My Best Friend, without Garcia. (The Dead were playing the “Dance of Death Costume Ball” in San Francisco that day.)
Nov 1 (Tues) – Garcia joined them, and played on Plastic Fantastic Lover.
Nov 2 (Wed) - he played on Today.
Nov 3 (Thu) - White Rabbit, redone from the Great Society’s version.
Nov 4 (Fri) - 3/5 of a Mile, without Garcia – the Dead were playing at the Avalon that night.
(Then there was a break in the sessions for shows in San Francisco & Vancouver.)
Nov 14 (Mon) – recording continued with JPP McStep B Blues, with Garcia playing, and How Do You Feel. (Garcia’s memory might be off when he recalled playing on this song too, but he was definitely at the session that day.)
Nov 15 (Tues) – DCBA-25, and the newly rearranged Somebody to Love.
Nov 16 (Wed) – Comin’ Back To Me, with Garcia playing. (Marty Balin wrote this song during the sessions, and recorded it right away with just Garcia, Slick, and Casady.)
Nov 17 (Thu) – Go To Her (remake of old song, no Garcia involvement, not included on album).
Nov 21 (Mon) – In the Morning, with Garcia playing.
Nov 22 (Tues) – Embryonic Journey.
At some point, Garcia apparently called the music “as surrealistic as a pillow,” thus inspiring the album title.
The sessions wrapped there, and the Airplane returned to San Francisco to play a run of shows at the Fillmore from Nov 25-27 (some of which has just been released, with the Surrealistic Pillow songs still fresh in the sets).

Jorma Kaukonen had many admiring words for Garcia’s role in this album. “He’s definitely in the mix and an important part of the band on those tracks. When I got into the Airplane, I didn’t have a clue about what an electric guitar was except that you plugged it in and it was louder. Jerry was way ahead of all of us in that. Jerry was his own electric guitar player from the jump.”
“When he worked with us on Surrealistic Pillow, he really helped discipline us. Because he had come from a band, and as a band leader and as an arranger, he just really knew what was important. He was really important in the formation of that record, and I know that personally he taught me a lot about playing in a band. I remember one evening he said to us, ‘It’s not what you play. It’s what you don’t play that’s important.’ In terms of dynamics and just plain letting the music speak for itself. As a band leader, he was really ahead of the rest of us.”

(Though Kaukonen may be exaggerating a bit in hindsight, it’s interesting how close this is to David Crosby’s statements about recording If I Could Only Remember My Name, when Garcia played a very similar role as a kind of co-producer – “Jerry Garcia is responsible for that record a very great deal. He was there night after night after night…thinking, listening, talking - you know, acting as a friend, saying ‘Hmmm, man, what if you, how did you, why don't you try a little more, and....’ And he would play. He played on a lot of stuff.”)

David Freiberg said, “He sure did help the Airplane with Surrealistic Pillow. I don’t know what that would have been without him. He was on every track, pretty near. I can hear him playing on Today. I always thought the sweetness that got put on that whole album never would have been there if it wasn’t for him. Because it wasn’t on any other album they ever did.” 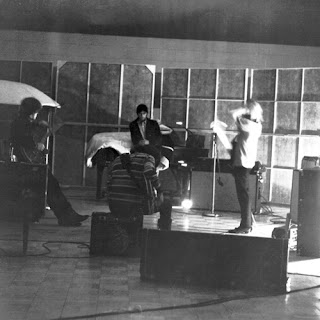 Posted by Light Into Ashes at 4:38 AM